Inflammatory bowel disease (IBD) involves chronic inflammation of all or part of the digestive tract. The two most common conditions associated with IBD are ulcerative colitis and Crohn’s disease. Both of these diseases often exhibit symptoms including severe diarrhea, pain, fatigue and weight loss. IBD can affect an individual medically and psychologically and can sometimes lead to life-threatening complications.

Conditions treated can include:

Crohn’s disease belongs to a group of conditions known as inflammatory bowel diseases (IBD). Crohn’s disease is a chronic inflammatory condition of the digestive tract from the mouth to the anus. Crohn’s is not an autoimmune disease, meaning that the immune system is not being triggered by the body itself, but rather caused by environmental, immune or bacterial factors. It is important to know that Crohn’s disease is not the same thing as ulcerative colitis, which is another type of IBD. Each have different areas of the GI tract affected. Crohn’s disease is usually affected in the end of the small bowel (the ileum) and the beginning of the colon, but it may affect any part of the gastrointestinal (GI) tract, from the mouth to the anus. Crohn’s disease can also affect the entire thickness of the bowel wall, while ulcerative colitis only involves the innermost lining of the colon. Finally, in Crohn’s disease, the inflammation of the intestine can “skip”– leaving normal areas in between patches of diseased intestine. In ulcerative colitis this does not occur.

In people with IBD, bacteria is mistaken as a harmful invader and the immune system elicites a response. Cells travel out of the blood to the intestines and produce inflammation (a normal immune system response). However, the inflammation does not subside, leading to chronic inflammation, ulceration, thickening of the intestinal wall, and eventually causing patient symptoms. 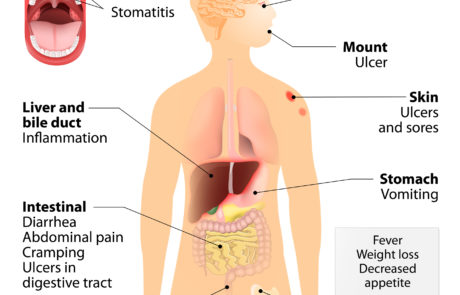 General symptoms that may also be associated with IBD:


Corticosteroids are often used to control a flare from Crohn’s disease, but because of the side effects of steroids, they are not the choice to treat Crohn’s for long term control. The biologics can help to relieve your Crohn’s symptoms and stay in remission. Discussing your treatment options with your gastroenterologist should include weighing the risks and benefits. Treatment serves to only help with easing or reducing the symptoms, maintaining remission and hopefully preventing any relapse.

Additional information about Crohn’s disease can be found Here.

Understanding ulcerative colitis is an important step to managing your condition. It is easier to manage symptoms and have a fuller healthier life. Ulcerative colitis is a chronic disease of the large intestine, which differs from crohn’s disease which can affect any section of the digestive tract. Another difference is that ulcerative colitis is the ulceration of only the lining of the colon- which presents as tiny open sores that produce pus and mucous. Crohn’s disease can affect all layers of the bowel. Both of these conditions fall under Irritable Bowel Disorder (IBD) but is not Irritable Bowel Syndrome.

Individuals with either ulcerative colitis or crohn’s disease the body’s immune system responds to food, bacteria, or other materials in the intestine as an invading substance. This triggers the inflammation process and ulcerations. About half of all patients with ulcerative colitis experience mild symptoms. Be sure to consult your doctor if you experience any of the following symptoms:

Additional information about ulcerative colitis can be found Here.